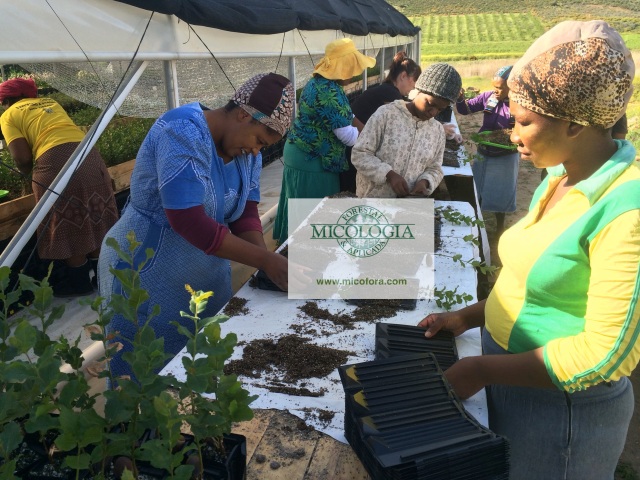 I´ve been visiting South Africa quite a lot in the last years, so let´s make a post about what it´s happening over there with truffle farming.

Recent studies carried out by Mosbec Truffle Farms and Micología Forestal & Aplicada, using Geographic Information Systems (GIS) show the potential area of black truffle cultivation in South Africa to be 21,010 km2, and if slightly acid areas are included this increases by another 7,744 km2. For bianchetto, the area is 23,746 km2, and if it is extended to take in neutral or slightly acidic pH soils, another 8,602 km2 can be added. This is equivalent to the potential area for this variety in Spain, making it one of the places outside the truffle’s natural European distribution area with greatest potential for development in the future. These potential maps have been published in our latest truffle farming book.

Unlike other countries in the southern hemisphere that were the first to start truffle cultivation, South Africa has large limestone areas within its optimal climate zone, where it is not necessary to bring up the soil pH prior to planting mycorrhized trees. This represents a great competitive advantage, in terms of price, over the other countries, which must produce more truffles to recoup their initial investment.

At present less than 50 ha have been planted, and in 2014 the first Tuber melanosporum was gathered in an orchard close to Dullstroom in  Natal area, in the northeast of the country. Last season another orchard produced near Villiersdorp area.

There are four commercial nurseries producing plants mycorrhized with T. melanosporum, primarily associated with Quercus ilex, which has become naturalized in the country. Pinus pinea mycorrhized with T. borchii is also being produced, as the Western Cape area has predominantly sandy soils, which are ideally suited to this truffle, and the Mediterranean stone pine is widely naturalized in the region, forming mature forests.