Last winter in Catalonia we had a whole month with temperatures below 0ºC and with constant fog. Frost accumulated day after day left holm oaks like the one of the picture above (left).

We have been sampling these orchards in late spring and saw like all Quercus ilex have grown normally. Not even the leaves dropped after ice melt. (right above pic in same plantation).

I saw while I was in Virginia (USA) last year problems with this host tree. Lack of growth that growers attributed to cold. I suspect that those Quercus ilex where Q. ilex ssp. ilex, less tolerant to cold than its brother Q. ilex ssp. ballota (=Q. ilex ssp. rotundifolia).

In a spanish paper found that winter temperatures at the nursery and therefore the hardening during the first year will condition the tolerance to the cold in the field.

Late frost may damage flowers as bloom comes when temperatures between march and may raises al average of 20 °C and 10 hours of daily sunlight, after a period of stress.

About acorn germination, although there is high variability from seed origin, if temperature drops to -12ºC during one nigh, acorns do not germinate.

They found no relationship between rate of growth of the holm oak seedlings and cold tolerance.

In another study named “Variation in cold hardiness and carbohydrate concentration from dormancy induction to bud burst among provenances of three European oak species” found that Mean cold hardiness values in January were –56, –45 and –27 °C for Q. robur, Q. pubescens and Q. ilex, respectively. Holm oak tolerates temperatures of -22ºC without lethal damage in 50% of the tissues, so pretty good resistance to cold. 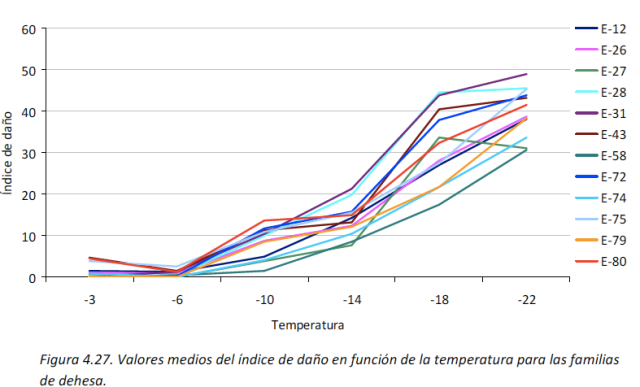 Studies reported that seedlings of Q. ilex ssp. ballota may be hardy to temperatures between –8 °C and –15 °C. Same authors found their results were consistent with studies on adult trees of North American Quercus species, showing maximum cold hardiness values up to –60 °C. Calmé et al. (1994) assessed the cold hardiness of seedlings of Quercus rubra (a species that can be considered ecologically comparable with Q. robur) originating from latitude 45° N and found cold hardiness values of between –10 and –20 °C in autumn.

And how does this cold tolerance works?

As oposite to deciduous oaks, in the evergreen species, Q. ilex, the total carbohydrate concentration increased continuously from October to March, suggesting that winter is a favorable period for evergreen Mediterranean species to accumulate carbon, indicating that mobilization of starch to sucrose invariably accompanies the development of freezing tolerance.