Posted on December 12, 2016 by trufflefarming 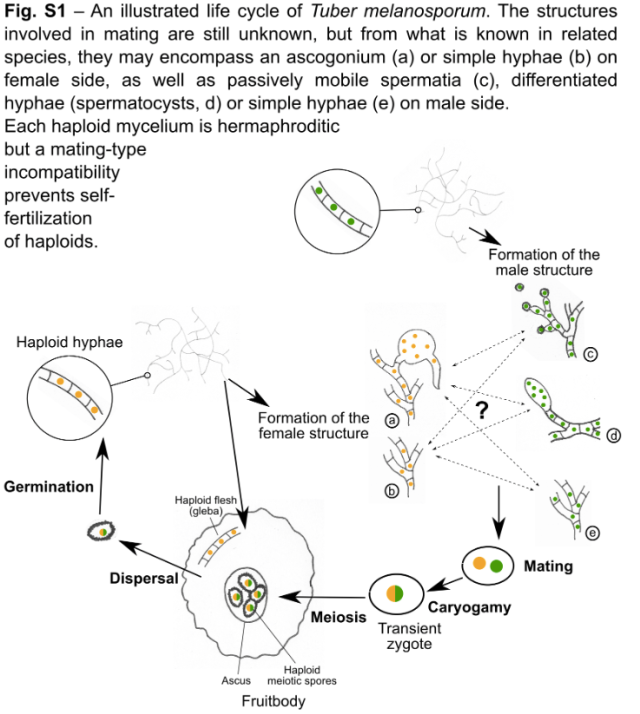 I was preparing a lecture for our growers seminars (Barcelona Truffle Tour) and rechecking this recent study presented at the last conference in Cahors and published in the journal Molecular Ecology and produced by a team of the National Museum of Natural History, with the CNRS and the University of Montpellier, gives more light on the reproduction cycle of the black truffle (Tuber melanosporum).

The french truffle season, like in Spain is pretty bad, mostly to the lack of rain in summer, but probably the dry spring that made trees to sprout weakly. Hunters say it will be one of the worst in years. Moreover in this paper they states that the spontaneous sites represent only 20% of the production.
Truffles results from a fertilization between two very different individuals: the first, large, considered as the mother, is associated with the roots of neighboring trees. It persists from year to year and nourishes the truffle. The second, considered the father, is smaller, annual, and not associated with tree roots. It could result from the germination of a non-dispersed spore, or a kind of male that survives only to fertilize a better installed individual.
The planting of inoculated trees did not change the genetic diversity of black truffle populations compared to wild sites. Thus, genes circulate freely between these environments. In one detail: in plantation, the number of fathers is higher and they are more genetically varied, perhaps because of spore intakes, voluntary or not, during truffle treatments.
There is a geographic variability of genetic diversity in the Languedoc-Roussillon region, which is still preserved in plantations. This suggests that the provenances of the inoculated trees should not be mixed too much if it is desired to preserve local genetic characteristics of the black truffle.

CEO of Micofora. Truffles and edible wild mushroom science and farming. Researcher, truffle farmer & mycologist
View all posts by trufflefarming →
This entry was posted in Uncategorized. Bookmark the permalink.